Get with the Jelly Belly Facts

1. What makes Jelly Belly beans different from other jelly beans?

Jelly Belly jelly beans differ from ordinary jelly beans because of their authentic and intense flavours, the number of flavours, the smaller size and the brilliant colours. Developed for the sophisticated palate, many Jelly Belly flavours use fine natural ingredients when possible to flavour the beans, i.e., chocolate, coconut, and fruit purees such as strawberry and pear.

2. Is Jelly Belly the first of its kind?

Yes, Jelly Belly was the first jelly bean to blend flavours into the heart of the bean. Traditional jelly beans have no flavouring in the centre. Jelly Belly is The Original Gourmet Jelly Bean®. 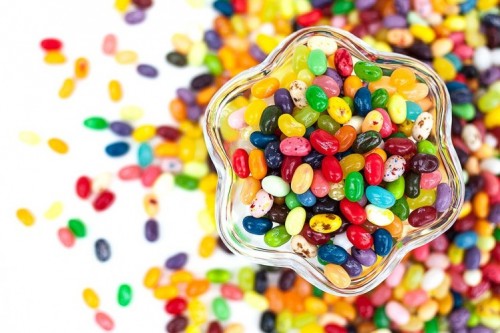 How many different Jelly Belly flavours are there and what are they?

4. How are flavours tested?

It's not easy to become a Jelly Belly bean. Deciding first on a flavour and then bringing it to full bean creation can take up to two years. All possibilities to get the right taste, using the best possible ingredients are explored before the new Jelly Belly bean is subjected to a Critic Session and Tasting Party. These sessions bring top management and employees together to submit opinions. The proposed new Jelly Belly bean is rated by flavour, colour, texture of the centre, appearance and thickness of the shell. When we reach an enthusiastic consensus of opinion, we release a new flavour to the public. It’s called the “WOW” factor!

It can then take up to 21 days to create a single jelly bean, so meticulous is the manufacturing process. The new bean flavour – they’re called rookies - then has to be accepted by the (now extremely discerning) Jelly Belly fan base. Some flavours are an instant hit, some take longer to penetrate the bean consciousness but become firm favourites, and others just don’t make the grade at all and fade into Jelly Belly history.

Jelly Belly beans first appeared on the shelves of fine candy stores in the United States in 1976. They are now sold in over 35 countries worldwide. When introduced in 1976, Jelly Belly beans were an instant success in the marketplace. They have become the favourite of many famous personalities and political figures around the world. They were also the first jelly beans in outer space when they went up with the U.S. astronauts in the June 21, 1983 voyage of the space shuttle Challenger (the same voyage as the first American woman in space, Sally Ride).

7. How were Jelly Belly beans invented?

A Los Angeles candy distributor called David Klein had an idea for a new breed of jelly beans made from “natural” flavours. A phone call to Herman Rowland, president of Herman Goelitz Candy Co. (now Jelly Belly Candy Company) intrigued the candy maker. The company had been successfully making jelly beans since 1965, but this was something entirely new. Our master candy makers went to work and came up with eight flavours in a small bean packed with intense flavour in the centre and the shell. The “original gourmet jelly bean” was born. Jelly Belly Candy Company continues to use real ingredients, when possible, to flavour Jelly Belly beans.

8. Is there any special way to eat a Jelly Belly?

Absolutely. The flavours are so dramatically different that we recommend you eat one at a time to discover the true flavour of each and every Jelly Belly bean. You can also creatively mix complementary flavours for a real gourmet treat. For example:

Create a recipe yourself!

9. How many calories are in a single Jelly Belly bean?

There are approximately 4 calories per bean, or about 100 calories per single serving 28g. They have no fat content, no dairy and no gluten. Jelly Belly beans offer a satisfying burst of flavour for modest calorie investment. 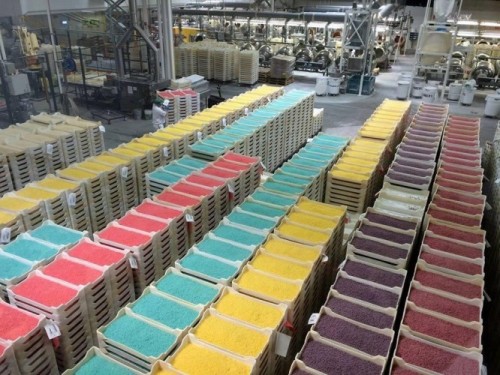 How many Jelly Belly beans are produced a day?

Together, Jelly Belly Candy Company in Fairfield, California, and its North Chicago, Illinois factories can produce 1,680 beans per second.

11. Are there any flavours which outsell the rest?

Currently, Very Cherry, Liquorice, Buttered Popcorn, Juicy Pear and Watermelon are at the top of the hit parade. Tastes vary by country, however. In the UK the most popular flavours are Very Cherry and Top Banana; in Japan they are Lemon Lime and Pineapple; in Australia they are Tutti-Fruitti and Buttered Popcorn; and in Mexico they are Green Apple and Piña Colada.

We continue to make a large variety of flavours because it has been an important element to the popularity of Jelly Belly beans--people love to select their favourite flavours. 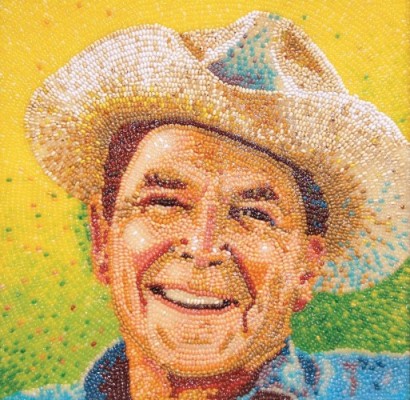 When did former President Ronald Reagan first become a customer of the Jelly Belly Candy Company?

In 1967, when he became governor of California, President Reagan began eating traditional “pectin” jelly beans made by Jelly Belly Candy Company in order to help him kick the pipe-smoking habit. The introduction of Jelly Belly in 1976 revolutionised the jelly bean world. At the time this may have been restricted to confectionery aficionados, but one of them was Ronald Reagan on the trail to become US President. Asked what kept him relaxed while campaigning and he held up his favourite treat for all the press photographers to see and Jelly Belly became an overnight phenomena.

Within weeks, Jelly Belly was two years behind in its orders!    Over three thousand kilos of Jelly Belly beans were shipped to Washington for the Inaugural festivities. Blueberry, one of the most popular current flavours, was invented especially in honour of the American flag and President Reagan’s inauguration so he could have red, white and blue beans. Reagan loved Jelly Belly and let everyone know. He gave them as gifts to visiting heads of state and VIPs and in fact it was the London American Embassy’s need for a steady supply, that led to Jelly Belly being stocked in Harrods – the first outlet in the UK.

Large scale mosaics are made from Jelly Belly beans into portraits of American classics. The art was originally the brainstorm of San Francisco artist Peter Rocha, who was entranced by the brilliant colours of the beans. The Jelly Belly Art calling has since been taken up by other artists, including Peter’s nephew, Roger Rocha and who lives in Surrey. The Jelly Belly Collection of Jelly Belly art includes portraits of Abraham Lincoln, the Statue of Liberty , Martin Luther King, George Washington, Elvis Presley, George Clooney and others. Here in the UK we have Kate & Will, Marilyn, Paul O’Grady and SHREK!

For more information go to www.jellybelly-uk.com